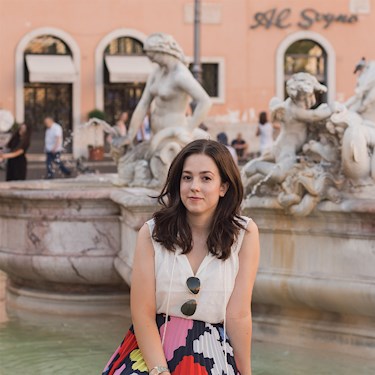 fridasfriday
Oh, hi! I'm Frida - a coffee loving, 20-something, Gothenburg based Swede. I'm a Digital Content Manager by day and Enthusiast Aperitivo Eater by night. I have an obsession with striped shirts, organic beauty products, Midsomer Murders and everything that has something to do with Italy. Yup, that's me!

Well, hello! It's me again - coming to you with another post about my dreamy vacay on Mallorca. This time around we had left the glorious sunbeds of PuroBeach (read that post here), eaten breakfast early and walked a good half our from our hotel to a little train station - that looked like something taken straight out of an old movie (or you know, Harry Potter...).

On the agenda that morning? A day trip from Palma, through the mountains and fields, over to the other side of Mallorca, with our final destination being the little town Sóller. How we got from A to B? By train, and not just any train! Once again I have to make an Harry Potter reference, because yes, this was like the Hogwarts train, but in miniature form. Pinch me!

The train was in pristine condition and I was quite impressed, actually. So, of course I snapped a few pics before the train started filling up with people. We had a good half hour or so before the rest of the people came onboard. According to the train's website, they advise passengers to be there, ready with your ticked in hand at the platform, roughly an hour before take off. And Swedish as we are, we were there an hour before, on the platform, with ticket in hand - along with a few other Scandinavian tourists. The southern European tourists? Well, they showed up as the train was about to leave. Of course. Mallorca is so much more than little beach towns and it was fascinating to see all the little villages along the way across the island. Here the train stopped for a few minutes and we were all let off. As the train stopped, the conductor said something about taking photos through the speakers - and after that, it only took a few seconds until the train was empty. All the people stood outside posing, while camera shutters ran warm and selfie sticks were up in the air before I could even blink. After almost precisely an hour we finally arrived in Sóller! Many cargo pants, sandals and backpacks were seen walking towards the same goal as we exited the train. Needless to say, it was easy to see that this train was not exactly a part of your regular morning commute. One thing I really liked about Palma was that all the old buildings were so beautiful and also beautifully kept. This little town was no exception, as it all looked cute & perfect. And as if the train wasn't cute enough, the little trams going from the town centre down to the port were, if possible, even cuter.

How many times can I write beautiful & cute? Not enough times when describing this place, clearly. But, before we jumped onto one of those cute (hehe) little trams down to the water, we had a look around the town. And let me tell you a funny story; my friend and I decided to get lost in the little narrow alleys in the search for a good place to take photos. As we randomly walked down little alleyways we could notice a couple following us. They were a Norwegian couple who seemed to take every turn just as we did. And when we stopped, to take photos of each-other, they stood a few metres away - watching. It was strange and the main reason as to why we escaped the busy main square was to not have an audience when taking portraits.

We tried our best to ignore our unwanted guests and a few minutes later walked further down the alley. And would you believe me if I said that they not only stopped at the same spot and took photos once, but twice! Both our scouted photo locations were theirs as soon as we stepped around the corner. I guess we're good location scouts, ey? After we came down the hill to the port, we strolled around, looked in shops and also took a stop by the cliffs to cool off our feet. Or, actually, my friend did - and I stayed dry and snapped photos of her dipping her toes. The heat was intense and at that point, we longed for our bikinis, that were foolishly left behind in our hotel room early that morning. But time flew by, and before we knew it, it was time for lunch. We sat down at one of the many restaurants facing the sea and I wanted something light and ordered a salad, and was given a few leaves that filled me up for three seconds. My friend, however, made a wiser choice and ordered the risotto. I don't like mussels and prawns (I know, being born and raised on the west coast - shame on me) but I do love the look of dishes with them in. They look so beautiful and I really wish I did like them for that very reason! Want to get on the same train? Here's the info you need!

Tickets: A round ticket from Palma to Sóller including the tram ride was €35.

Time: We got on the 10.10 train in the morning and headed back on the latest train at 18.30. We massivley over estimaed the time we would need in the town and at the end of it all, we actually had to kill time.

Our mistake? We didn't bring our bikinis! If we would have those with us, time wise, it would have been perfect to get there with the 10.10 train and head back with the 18.30 train.